What is Aico AudioLink and What CO Alarms use this technology? 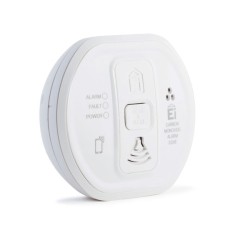 This is the Ei Electronics Aico Ei208WRF RadioLINK Carbon Monoxide Alarm with a Powered-for-Life Lit.. 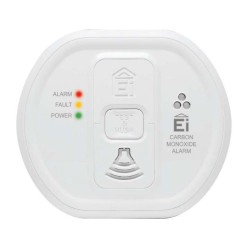 This is the Aico Ei208 Carbon Monoxide alarm complete with a 7 year life sealed lithium battery.&nbs..

What is Aico AudioLINK? It is a revolutionary new data extraction technology which is integrated into all the Aico CO alarms (Carbon Monoxide alarms) and in the new Multi-Sensor fire alarm. It is a great tool for landlords since it allows real time data to be extracted via the alarm's sounder, providing proof that the alarms are working properly, and that it is being tested regularly by the tenants. 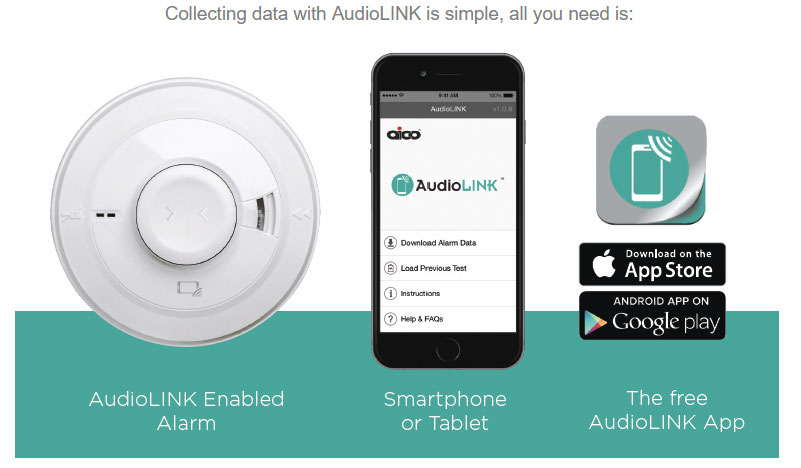 All you need to do is have an AudioLINK enabled alarm, a tablet or smartphone, and the free AudioLINK app (which is available on iOS, Android, and Windows phones)! The data you extract is converted into an easy-to-use colour-coded Alarm Status Report, which is simple to review and store. It records alarm activations, run time, battery level, test button activation, and much more.

What can the AudioLINK technology do?

Based on real time facts, you can take real time action! With the help of Aico AudioLINK you can:

You can get the AudioLINK app via the Google Play market here, Apple iOS appstore here, and the Windows phone app store here.

Extracting the Data from AudioLINK-enabled Alarms 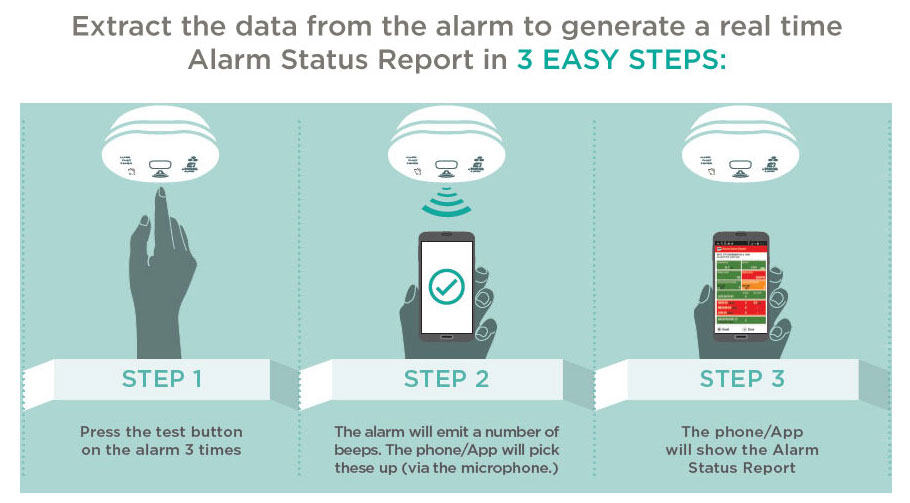 Extracting the data from the AudioLINK enabled alarms in order to generate a real time Alarm Status Report is easy in three simple steps: 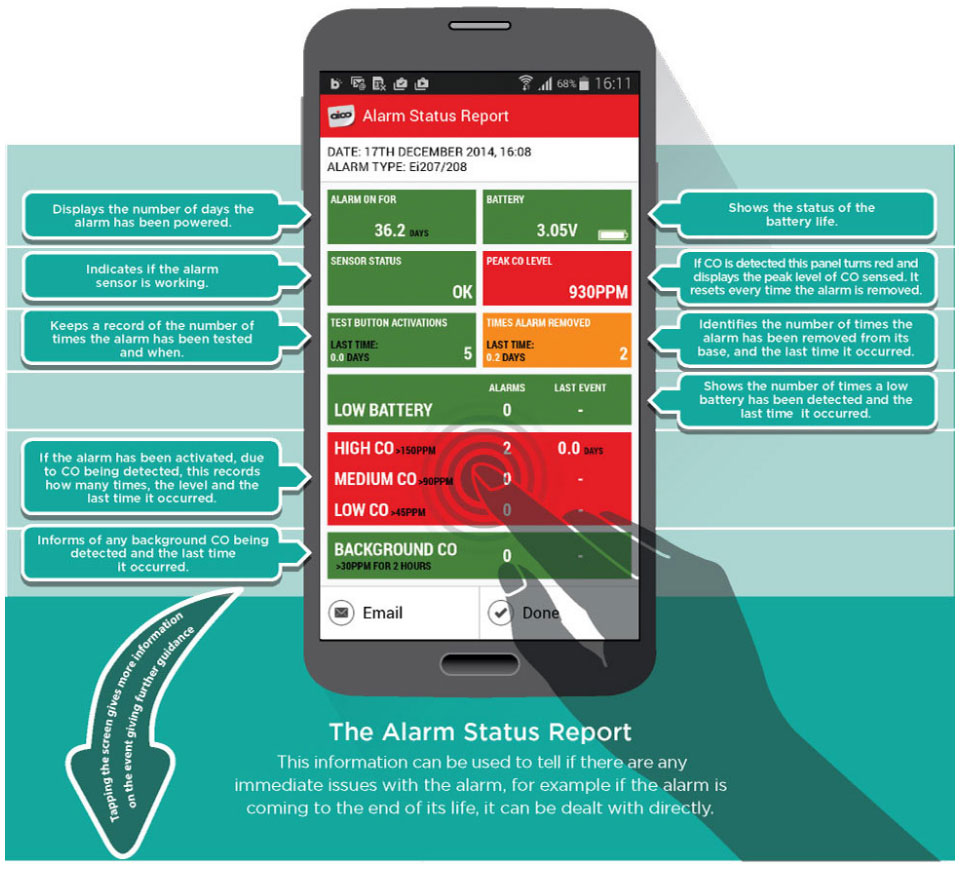 The information displayed in the Alarm Status Report can be used to tell whether there has been any immediate issues with the CO Alarm, for example, if the alarm is coming to its end of life, it can be dealt with immediately. And if you want to save these reports, you can email them to yourself. You can also see more information concerning each of the features of the alarm, and definitions of technical terms.
To store the report generated, further details can be added about the location of the alarm or additional comments such as time and date, and then these are emailed to a cetrain location to maintain the records.

What Carbon Monoxide Alarms use AudioLINK? 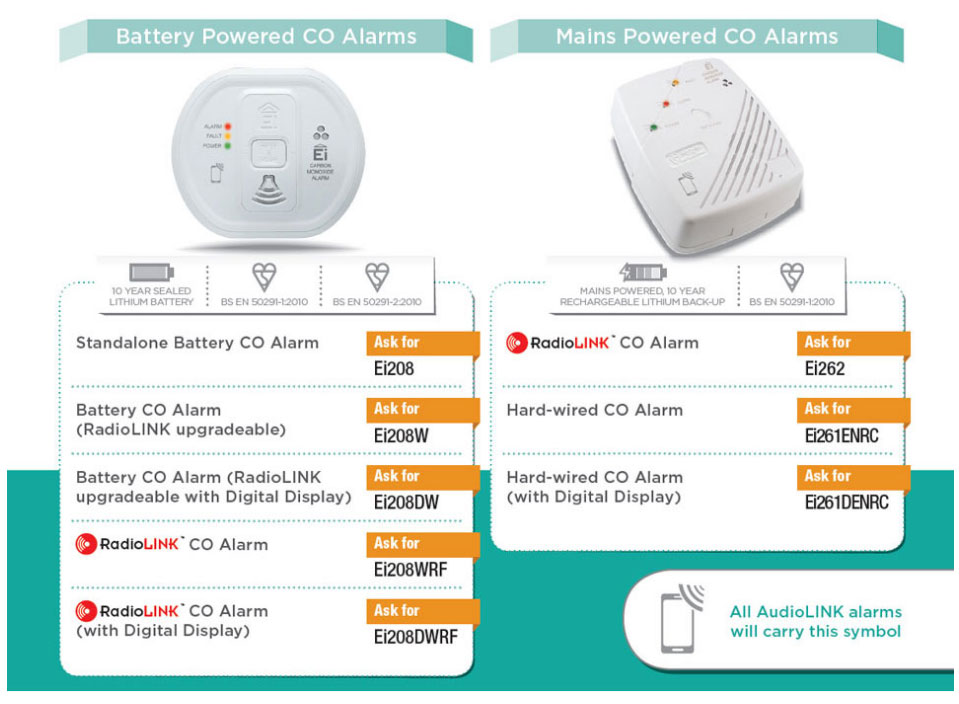 Among the battery powered CO Alarms using AudioLINK are:

You can easily recognize the AudioLINK alarms by the symbol on the box. 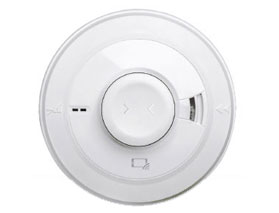 A wide range of Aico AudioLINK enabled Carbon Monoxide alarms are available via SparksDirect.co.uk; they allow you to check and get a report via your smartphone to see the status of the CO alarm and get a complete report as needed. 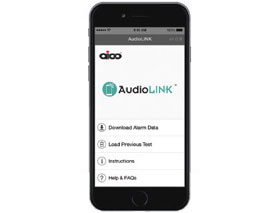 All you need is a smartphone or a tablet running either iOS (iPhone, iPad, etc), Android (Samsung, LG, HTC, and many other manufacturers), or Windows Mobile (Windows phones) in order to check the status of your carbon monoxide alarm. 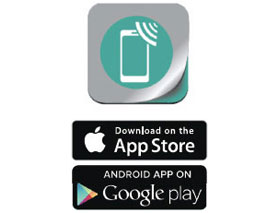 You can download the free AudioLINK app from the app store, google play, or the windows store; full instructions of how to set it up, operate it, and generate reports (which can also be sent by email) are available on our website.