Are LED battens the future of the batten luminaires? Fluorescent vs LEDs

2020-02-20         admin
Batten luminaires have been in use for over 60 years now, providing a fantastic lighting solution for long ceilings and other locations. Since they were first introduced they have predominantly been lit by fluorescent battens.

The first batten luminaire would have been very bulky indeed by today’s standards; with a 37mm T12 lamp and a heavy, transformer type control gear. They would be considered extremely inefficient in our modern, more eco-conscious world.

Thankfully, contemporary LED battens have made strides in the market, and look to be the future of batten luminaires.

In this article, we will examine the differences between the two types and recommend LED battens for your property, whether it be a workplace or domestic setting.

Luminaire battens in the workplace: the need for changes

Batten luminaires have long been staples of the office workplace, as they offer long straight strips of lighting overhead that is ideal for this kind of environment. Our workplaces have changed dramatically since the ‘60s, but the qualities we require from our lights remain the same.

Even today, LED battens are sold at the same kind of lengths as their fluorescent counterparts: 4, 5 and 6 feet. These are regulatory sizes for office workspaces. However, there are many things changing about battens including the lamp uses, integral components and their aesthetics.

Early battens consisted of a bare fluorescent tube on a folded steel spine, onto which you could add accessories such as reflectors. This is rarely the case anymore, as businesses look to improve the appearance of their workplaces, as improved aesthetics have been shown to lead to increased productivity.

LED battens are also more energy-efficient than their fluorescent counterparts, so this is an added bonus for money-minded business owners. These changes in the batten luminaire market have led to a great deal of ‘retrofitting’ in workplaces. 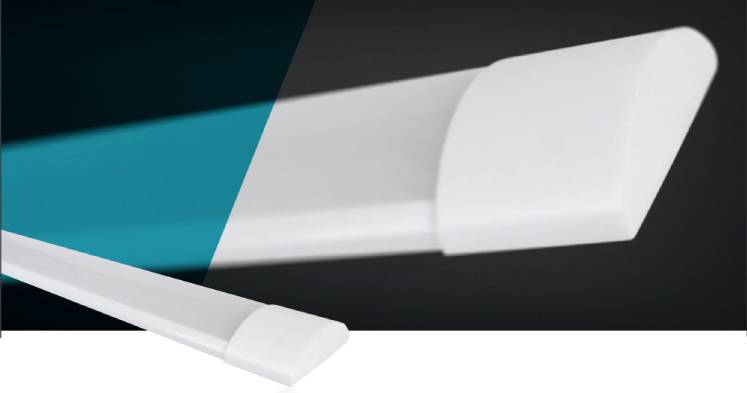 Alan Tulla, the technical editor at Lux, has explained in detail why LEDs are better than fluorescent, by running comparisons between the two types. A conventional 1.2m batten with a single T5 or T8 fluorescent lamp emits about 2,500 lumens - meanwhile, all the LED versions Alan looked at had a greater output.

For instance, the Tono Integrated LED Batten from Megaman, emits an impressive 3600 lumens and produces 3000K of warm white light.

Most manufacturers offer a standard and high output version when it comes to LED luminaires. Looking at power output alone, the higher wattage LED is equivalent to a twin lamp fluorescent, which shows how far it eclipses its predecessor in this matter.

‘Accent lighting’ is becoming an increasingly important factor in workplaces as it improves appearance and therefore productivity (as mentioned above). Even with something as simple as a batten, it is worth considering light distribution, as illumination isn’t required solely on the worktop or desk.

Typically, an LED batten emits light over a 120 degree downwards radius. A bare fluorescent lamp would give you an angle closer to 240 degrees (perhaps 180 degrees with a diffuser).

The wider angle beam of light will cause more glare on worker’s computer screens. It has been established that glare causes headaches and increased absenteeism amongst employees. This means that the more focused beams of the LED battens are considered the more desirable by employers.

A bare fluorescent lamp shines some upward light which can lighten the ceiling and improve the appearance of a space. However, this comes at the expense of horizontal illumination. It is preferable to have the light in an office focused downward and horizontally for practical purposes.

The upward lighting and wide beam angle of the fluorescent battens are indicative of why they consume so much more power than LED battens. They are wasteful in the way they light a room.

Installing your new LED battens: it’s simpler than you may think

We hope that this article has convinced you to join the trend of retrofitting fluorescent bulbs for LED ones! Here is a quick guide on how to make the switch - also - make sure mains power is OFF while you complete this installation (and a registered electrician has to do the electrical work). So to summarise, with an LED batten, you simply need to connect the mains live to one end and the mains neutral to the other and it will then operate! The switch-over is extremely simple, LED battens are more energy-efficient and more attractive.

With all these points in mind - what is stopping you from retrofitting your fluorescent lamps to LED battens today! You can view our full range of LED battens via this link - it is an ever-increasing category of energy-efficient lights on our website.