What Is An RCBO & How Does It Work?

An RCBO is a residual current circuit breaker with an integrated overload relay. It combines two devices (RCD/RCCB and MCB) that are commonly used in domestic and industrial fuseboxes (consumer units).

The main benefit of using an RCBO is that it can save space in the electrical distribution panel. Additionally, it provides protection against both overloads and short circuits. RCBOs are designed to trip when they sense an imbalance in the current flowing through the live and neutral wires. Read on to know more about this valuable device!

MCCB Vs MCB Vs RCBO: What Do They Mean?

An MCCB is a molded case circuit breaker, and an MCB is a miniaturised circuit breaker. They are both used in electrical circuits to provide overcurrent protection. MCCBs are typically used in larger systems, while MCBs are used in smaller circuits.

An RCBO is a combination of an MCCB and an MCB. It is used in circuits where both overcurrent and short-circuit protection are required. RCBOs are less common than MCCBs or MCBs, but they are growing in popularity due to their ability to provide two types of protection in one device.

MCCBs, MCBs, and RCBOs all serve the same basic function: to protect electrical circuits from damage due to excessive current conditions. However, they each have their own advantages and disadvantages. MCCBs are the largest and most expensive of the three options, but they can handle higher currents and have a longer lifespan.

MCBs are smaller and less expensive, but they have a shorter lifespan and can only handle lower currents. RCBOs are the most advanced option, and they offer the benefits of both MCCBs and MCBs in one device.

When there's an abnormality detected in a circuit, an MCB or miniature circuit breaker automatically switches the circuit off. MCBs are designed to easily sense when there's an excessive current, which often happens when there's a short circuit.

How does an MCB work? There are two types of contacts in an MCB - one fixed and the other movable. When the current flowing through the circuit increases, it causes the movable contacts to disconnect from the fixed contacts. This effectively "opens" the circuit and stops the flow of electricity from the main supply. In other words, the MCB acts as a safety measure to protect circuits from overloads and damage.

MCCBs are designed to protect your circuit from overloading. They feature two arrangements: one for overcurrent and one for over-temperature. MCCBs also have a manually operated switch for tripping the circuit, as well as bimetallic contacts that expand or contract when the MCCB's temperature changes.

All of these elements come together to create a reliable, durable device that can help keep your circuit safe. Thanks to its design, an MCCB can be a great choice for a variety of applications.

MCCBs and MCBs are both circuit breakers that provide an element of protection to the power circuit. They are mostly used in low voltage circuits and are designed to sense and protect the circuit from short circuits or overcurrent situations.

While they share many similarities, MCCBs are typically used for larger circuits or those with higher currents, while MCBs are more suited for smaller circuits. Both types of circuit breaker play an important role in ensuring the safety of electrical systems.

What Differentiates MCCB From MCB?

The main difference between an MCB and MCCB is their capacity. An MCB has a rating of under 100 amps with an under 18,000 amps interrupting rating, while an MCCB provides amps as low as 10 and as high as 2,500. In addition, the MCCB features an adjustable trip element for the more advanced models. As a result, the MCCB is more suitable for circuits that require a higher capacity.

Following are a few more essential differences between the two types of circuit breakers:

An MCCB is a specific type of circuit breaker that is used to control and protect electrical systems. MCBs are also circuit breakers but they differ in that they are used for household appliances and low energy requirements.

MCCBs can be used for high energy requirement regions, such as large industries.

It is not possible to remotely turn on and off an MCB while it is possible to do so with an MCCB by using a shunt wire.

MCCBs are mainly used in situations where there is a very heavy current while MCBs can be used in any low current circuit.

RCCB Vs RCD Vs RCBO Vs RCB: What Do They Mean?

Residual current protection devices, like RCBOs and RCCBs, are circuit breakers that monitor the current flowing in a circuit's line and neutral. In a healthy circuit, the current in the line should equal the return current in the neutral. However, if there's an abnormality, the return current might not equal the line current. In this case, the residual current device will sense the discrepancy and interrupt the circuit. By doing so, these devices help protect against electrical hazards.

What Is An RCBO?

An RCBO is a device that combines the functions of an MCB and RCD/RCCB. When there is a current leakage, the RCBO trips the entire circuit, preventing further damage. Consequently, internal magnetic/thermal circuit breaker components can trip the electronic device when the circuit is overloaded, protecting it from further damage. In this way, an RCBO can be a vital piece of equipment in protecting your electrical circuits.

Electrical systems are components of our daily lives that we often take for granted. We use them every day without a second thought, but when something goes wrong, it can be a major inconvenience. That's where devices like RCBOs and RCDs come in.

Both electrical devices are typically found in a fuse box, commonly referred to as a consumer unit or breaker panel. Similarly, they both help in the protection of systems. RCBOs (Residual Current Devices with Overcurrent Protection) are used in homes and businesses to protect against electric shock and fires.

They work by sensing when there is an imbalance in the current flowing through the electrical circuit and shutting off the power before it can do any damage.

So, what's the difference between an RCBO and an RCD? An RCD is a protective device that will normally protect at least 5 circuits. If it picks up a fault on any of these circuits, it will trip and cut the power to every circuit it's protecting. An RCBO is basically exactly the same as an RCD, except it protects 1 individual circuit. So, if you're looking for protection for just one circuit, then an RCBO is probably what you need.

What Differentiates An MCB From RCD?

The biggest difference is that MCBs don't protect against earth faults, while RCDs/RCCBs do. This means that if there's a problem with the earth connection, an RCD will trip and cut off the power, but an MCB won't. This can be important in preventing electrical shocks. 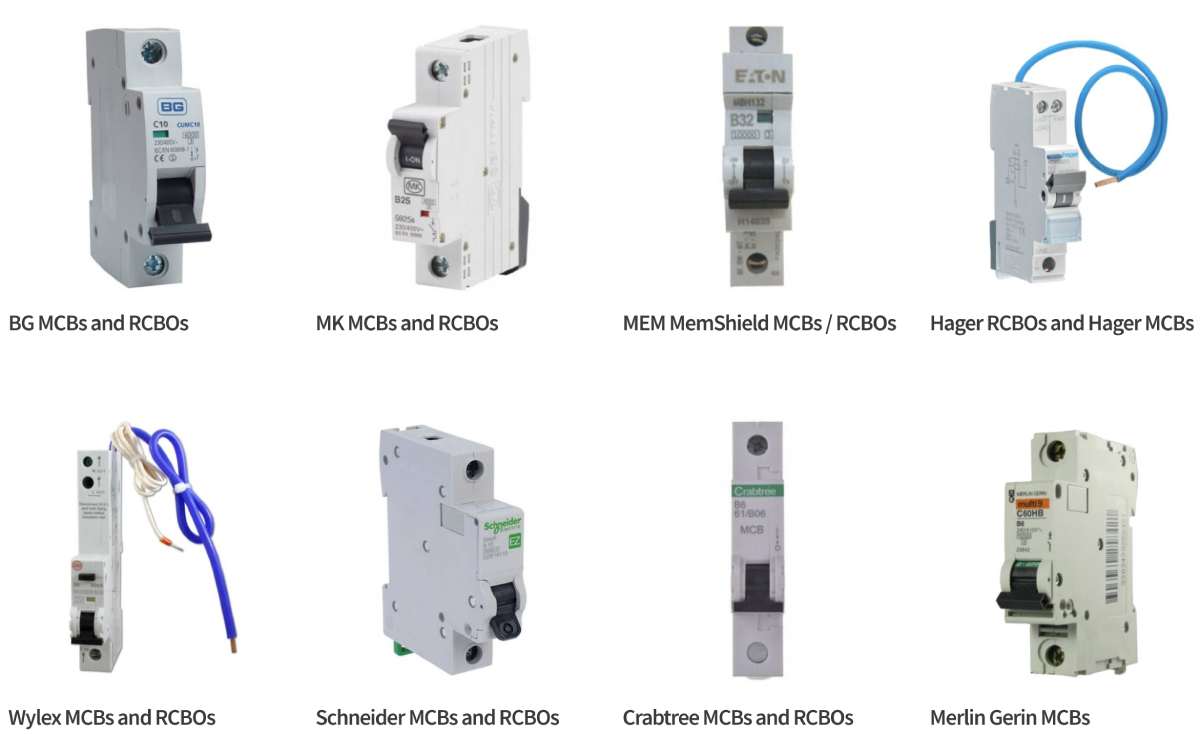 So, what is an RCBO and how does it work? An RCBO, or residual current circuit breaker with excess current protection, is a type of circuit breaker that combines the functions of an MCB and RCD. It protects against both overloads and short circuits and can be used in both residential and commercial settings. Based on the need for electrical protection you have and being advised by your electrician, you can choose either a RCD or a RCBO.