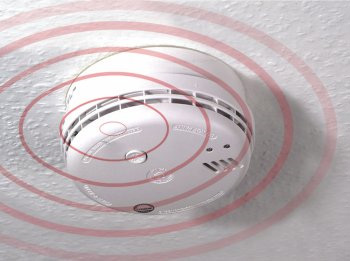 Many of you are likely to be aware of the issue that made national news earlier this year regarding the domestic ten year smoke alarms beeping as if they were low on battery power, despite being just a few years old.

The smoke alarms were fitted as part of free home fire safety visits by the Fire and Rescue services in properties across many areas of the UK.  Thousands of people have now complained about problems with these alarms. This doesn’t make for good reading and it certainly doesn’t show the fire safety industry in a good light.  But the real problem here isn’t one of public relations for the fire industry.

It’s actually a very real, very serious issue of safety as residents often disable the alarms to stop the noise, leaving them completely unprotected if a fire should break out.

At the time of writing there still hasn’t been a public explanation for the alarms’ malfunction, although there has been talk about them not being cleaned regularly enough by residents or being affected by nicotine and other forms of contamination.

Unfortunately, this whole episode raises serious concerns over the quality of some of the fire alarms on the market.  ‘Built down to a price rather than up to a high quality standard’ comes to mind and surely this is not an acceptable principle for a life safety product.

A misconception also exists that an alarm manufactured to BS EN 14604: 2005 is an endorsement of the quality of the alarm and therefore all alarms produced to the standard are directly comparable.  But conformance only means that it meets the criteria set down in the standard; this doesn’t necessarily mean that the product is of high quality.

There are some major differences in the alarm build and quality between manufacturers, mostly as result of building down to a price.  Often a manufacturer has just done the bare amount of work needed to make the alarm meet the requirements of the standard.

Transients are often the cause of intermittent, random beeping and can even trigger fully fledged nuisance alarms.  This problem can be minimised or even eliminated by careful circuit design that incorporates additional components to smooth out the transients.

However, you are only likely to find them in a quality alarm because their inclusion requires a high degree of circuit design expertise and they also increase manufacturing costs which, in turn, increases the market price.

The design and build of the sensor chamber, particularly in optical alarms can have a significant effect on susceptibility to nuisance alarm.  There has been some talk that the smaller the chamber, the more sensitive the device.

There is some truth in this, but this benefit can be more than outweighed by the problem of dust contamination and the resulting false alarms that could be experienced if the design of the chamber is suspect.  Is there an insect mesh in place to protect the chamber from insects and fibres that are the most common cause of false alarms?

And has the chamber been purposely designed for use in a domestic smoke alarm rather than simply copied from a commercial detector design? What would be wrong in copying a commercial design, you may ask.

Nothing, except that they are designed to be stripped down for cleaning on at least an annual basis.  As a result, there is no requirement to be robust enough to last up to ten years without any proper maintenance, as a smoke alarm sensor chamber probably has to be.

All of these points should be serious considerations by a manufacturer but all are costly to effectively design into the product.  They most certainly should be taken into account when considering which smoke alarms to stock.

The industry standard for the Domestic Fire Alarms

Another feature worth noting is the horn.  85dBA at three metres is the industry standard sound level and you can pretty much guarantee that the alarm will produce this.  However, the horn assembly on all alarms are not the same.

Most manufacturers use pressure contacts for the horn disc, because they are a lower cost option.  This may not cause a problem, but if the unit is subjected to high levels of humidity (and they often are) there is a possibility that corrosion of the contacts could occur causing a failure of the alarm to sound at the critical time of a fire.

Manufacturer testing of alarms is also an activity that you could argue separates the good from the not-so-good.  Many manufacturers only batch test smoke alarms, which in our view simply isn’t good enough when you’re dealing with a life saving device.

Aico alarms, for example, are comprehensively tested at several points of the manufacturing process, including at the Printed Circuit Board stage (In-circuit Test) and at the final assembled stage, where a Functional Test is carried out.

Environmental stress testing is conducted and optical alarms have their sensitivity set by calibrating in actual smoke. Quality Assurance checks are carried out on all products at the sub-assembly, final-assembly and packaged stages.

It’s a major task that has an impact on the price of the product but surely the peace of mind is worth that little bit extra.

The other major consideration in ensuring you purchase quality smoke alarms is the power source and security of it. It’s estimated that at any given time around 50% of the nation’s battery smoke alarms are disabled.

People remove the batteries to silence them, or to use in another device.  Even if they leave them well alone, the standard batteries can be affected by changes in temperature, plus you have to rely on the resident to change them.

The only reliable way to overcome this is to use mains powered smoke alarms with rechargeable Lithium cell back up which can’t be removed like common PP3 batteries or used in anything else.

But, don’t assume that all rechargeable cells are the same; the type of rechargeable cells used in the product and the way the charging circuit is set up are extremely important.  Both of these often overlooked points can have a significant effect on the reliability of the back-up supply.

The Functionality of the Smoke Alarms 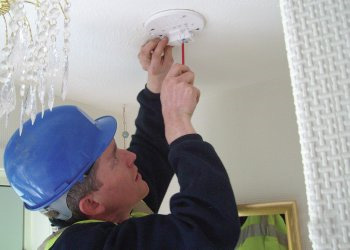 Then we come on to added alarm functionality and accessories, which will be more widespread with a good quality alarm. The ability to interconnect smoke alarms is a requirement of BS5839 Part 6 and Building Regulations and any half decent alarm will allow for this.  Interconnection can be achieved through hard wiring or, more recently, through wire free RF technology.

The latter is ideal for retro fitting as it removes the need for ugly trunking or re plastering and decorating.  Aico offers such a facility with its RadioLINK system in addition to a wide range of complementary ancillary products to tailor-make a system to specific requirements.

By only stocking an alarm that has been quality tested at all stages of manufacture and has been designed and built up to a standard rather than down to a price, can you rest assured that you have done all you can to protect yourself and those whose life may depend on you making the right decision.

By the way, the high quality Aico Domestic Fire Alarms, Smoke Alarms, Heat Alarms, and CO Alarms, can be found on our website via the Fire Alarms section.