How to change the battery in your Aico Fire alarm? Aico Advice: changing the battery

The alarms that are in your home will most likely be wired into (and powered from) the mains power, but are likely to also have a built-in battery back up to power the alarm if the mains fails. There are two main types of battery back-up - Rechargeable Lithium and Alkaline.

The Fire Alarms with a Rechargeable Lithium back-up will never need their battery changing as the back-up is designed to last for the lifetime of the alarm (10 years). Alarms with this type of back-up will have a sticker on the front, like that shown below.

Remember: on the Sticker it needs to say, Rechargeable Lithium back-up

The Fire / Smoke Alarms with Alkaline battery back-up will need the back-up battery changing during the life of the alarm.

Typically, the battery will last around 3-4 years in standby but the alarm will beep once a minute to let you know when the battery needs changing.

The battery is built-in to the back of the alarm, so the alarm will need to be removed from its base-plate (which is the only part actually fixed to the ceiling) before the battery can be changed.

Step 1: Turn off the mains power to the alarm. To do this, have a look on your fuseboard/consumer unit for a circuit marked 'Smoke Alarms' and turn this circuit off. The green light on the alarm should go out.

Note: if you don't have a circuit marked 'Smoke Alarms', turn off the main power switch. However, be aware that this will turn off the power to everything in the house, including the lights. 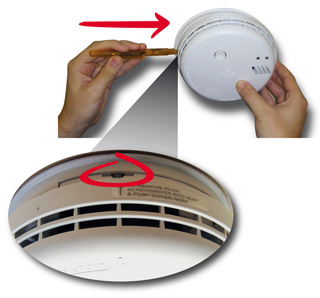 Step 2: Look for the alarm removal slot on the side of the alarm. There will be a label with a grey arrow pointing to the slot, along with the wording 'TO REMOVE, PUSH SCREWDRIVER INTO SLOT & PUSH COVER AWAY'.

Push the tip of a small flat bladed screwdriver into the alarm removal slot. You only have to push it in around 1cm as this will be enough to release the locking latch inside. Make sure you keep the screwdriver horizontal (i.e. parallel to the ceiling) as inserting it at an angle could jam the locking latch.

Step 3: With the screwdriver still inserted, slide the bottom half of the alarm horizontally away from the screwdriver. It should move across slightly. 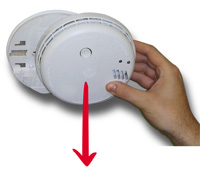 Step 4: Now the alarm is released from the base-plate and is free to be removed.

Note: The base-plate will still be fixed to the ceiling as this is the part that is wired into the mains power. 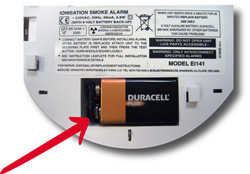 With the alarm removed, you will be able to see the battery in the back. Remove the old battery from the snap connectors and replace with a new one, then refit the alarm.

Note: Use one of the following 9V Alkaline batteries only - Duracell MN1604 or Energizer. Other batteries may cause problems.