More About the Latest and Most Affordable LED Technology (COB, Chips on Board)

The LEDs are a fast evolving technology, from small lamps to higher wattage lamps. They will eventually get to the point where they will replace the high incandescent lamps and even the fluorescent lamps.

But not yet. Not this year, but most likely soon, the LED lights will be THE LIGHTS people will use (unless someone develops a better technology for lighting). There is a continual need for innovation in this domain, and it is foreseen that the LED lights are to be the new technology as far as illumination is concerned.

We wrote an article a while ago introducing some of the advantages and disadvantages of the LED lights, and someone recently commented rightly on it saying that CFLs and T5 fluorescent lamps can offer a better CRI (color rendering) illumination output.

In the beginning people loved LED lights because of the light effect they offer, and not the color rendering, the illumination effect. Especially the small, tiny LED lights, they offer more lighting effect, giving out the light but not yet matching what we used to have with a dichroic lamp, a CFL, or a fluorescent fitting. The light output is not as crisp, as good, and as useful for general lighting as the lighting solutions we are used to have.

But now with the latest LED technologies out there, you can have COB LED lights (Chips on Board). This technology allows multi LED chips to be packaged together as one lighting module, and when it lights up, it looks like a lighting panel (see more here).

Halers LED lighting were the market leaders in the affordable LED lights approx. 6 months ago, but now it is the COB technology for the LED lighting. The CREE Chip is also good, the "Rolls Royce of LED Chips", offering brightness and reliability for power LEDs (plus efficient, environmentally friendly LED lights) - read more via cree.com. Note: the Halers LED lamps are no longer available at Sparks. 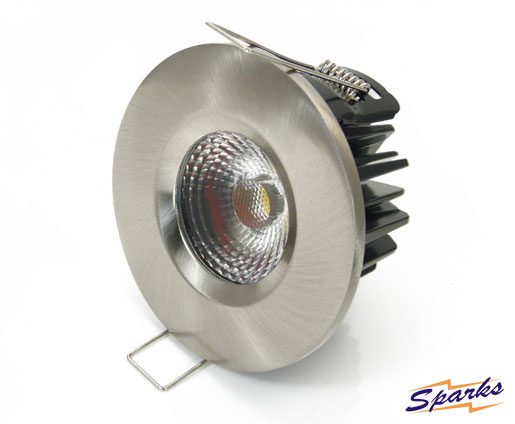 The COB technology will allows the LED lights using it to be dimmable to almost 0 (not 25-30%, as many LED lights do today), and they offer an improved lighting output quality, bringing it more to the color rendering we are used to in the older light bulbs (CFLs, compact fluorescent, etc).

Here are some of their advantages (via PLSN):

What's Next for LED Lights?

The LED technologies are in a continual development, and we don't know what the future holds for the space of lighting in general. Would we use LED lights in all the lighting applications? Not yet, maybe not in all general lighting applications, because they are still expensive and the light they offer is not refined to be what we need... But as time gos on, as the LED technologies evolve, the LED lights become better and their price is not that high.

For now we can recommend you the latest technology of LEDs incorporated in the ELAN range of IP65 fire rated LED downlights available at Sparks for as low as £39 + VAT. Very affordable. They include many of the latest technologies like COB, fire protection, IP rating, energy saving, etc.

Also, they come in the Fixed or Adjustable version (fixed or tilting), and each range offers you either Neutral White or Warm White light, in a White or Brushed Nickel finish. Check these out for yourself!